Snow can be an inspiration for a math activity on a snowy day. Have students calculate the percent of snow that is water. The density will vary, as light and fluffy snow has much less water content than heavy and wet snow.
Gathering the Snow Data
The photos on the left show a one-liter container and a one-quart container filled with snow. The photos on the right show water from the melted snow. 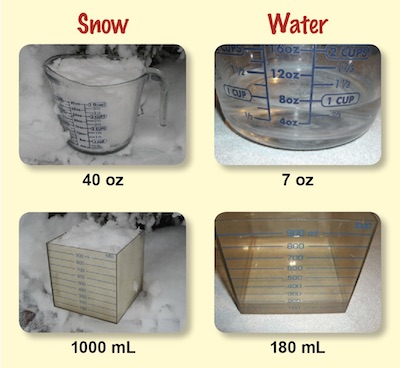 What Percent is Water?
Remind students that percent means per hundred. So, after converting a fraction to a decimal in hundredths, it's easy to write the percent. Have students divide the amount of water (in ounces or milliliters) by the original amount of snow and convert to a decimal and a percent. For these snow samples, 7/40 is about 0.175 or 17.5%. and 180/1000 = 0.18 or 18%. Thus, the ratio of 7 to 40 is nearly the same as 180 to 1000. Discuss the results from students' snow samples. Does snow from different places have a different percent of water?
Understanding Density
Density is mass divided by volume. In metric, 1 mL of water weighs about 1 gram and takes up 1 cubic centimeter of volume. So, the density of water is very, very close to 1. Thus, you can say that the density of snow for the samples above is 0.18. Snow density can vary from 0.05 for very light snow to 0.5 for heavy packed snow.
Extension Idea
You might ask students to calculate the weight of a specific depth of the snow that was tested, over an area such as the roof of a house. They should calculate the volume of snow and multiply by the density to find the weight. This may be easiest with metric measurements.
Thanks for visiting my blog. Enjoy the snow!
Previous Post
Next Post